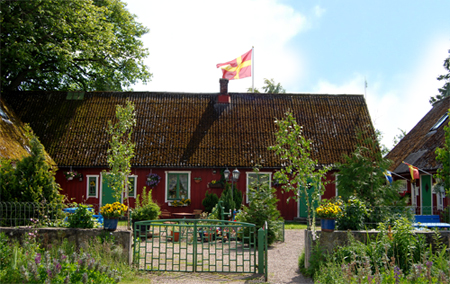 The farm was built in the first half of the 19 th century. It is situated just by the scenic castal road between Vegeholm and Kullaberg, where in older times the people from the inland forests used to pass by with horse carriages on there way to buy herring. The farm lies only a few minutes walk from the shoreline, offering magnificent views of the Skälder bay and the opposite Bjäre peninsula.

The farm was sold in 1870 on a compulsory auction. The neighboring farm and a corporal (later become country policeman) bought the farm.

In 1943 the parents of the former owner Thora Celik bought the farm, to grow vegetables on.

In 1971 Thora Celik took over after her father Albert Olofsson, hence the name Albertsgården.

In 1987 the stable was finished to come into use as a café, after a radical renovation carried out by Risko Celik, Thoras husband.

In 1989 the barn also was renovated, where now larger groups of people can be welcomed. The hayloft above the stable and the barn are now also renovated. Four rooms are used for bed&breakfast in a quiet and homelike atmosphere.

2011 took the youngest doughter Diana over the farm and the coffee and is running it today.